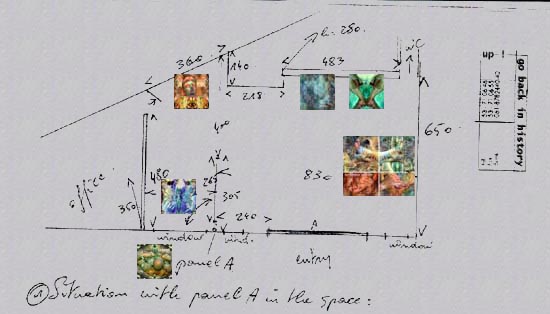 The atomic wind catches your wings and you are propelled backwards into
the future, an entity time travelling through the late C20th, a space
case, an alien angel maybe, looking down the deep throat of a million
catastrophes.screenflash of a millionmillion conscious machines

users caught in the static blitz of carrier fire

unseeing the download that scribbles on their burntout retinas

Sucked in, down through a vortex of banality. You have just missed the
twentieth century. You are on the brink of the millenium - which one -
what does it matter? It's the cross dissolve that's captivating. The hot
contagion of millenia fever fuses retro with futro, catapulting bodies
with organs into technotopia . . . where code dictates pleasure and
satisfies desire.

Pretty pretty applets adorn my throat. I am strings of binary.
I am pure artifice. Read only my memories. Upload me into your
pornographic imagination. Write me.

Identity explodes in multiple morphings and infiltrates the system at
root.

Unnameable parts of no whole short circuit the code recognition programs
flipping surveillance agents into hyperdrive which spew out millions of
bits of corrupt data as they seize in fits of schizophrenic panic and trip
on terror.

So what's the new millenium got to offer the dirty modemless masses?
Ubiquitous fresh water? Simulation has its limits. Are the artists of
oppressed nations on a parallel agenda? Perhaps it is just natural
selection?

The pleasure's in the dematerialisation.

We are the malignant accident which fell into your system while you were
sleeping. And when you wake we will terminate your digital delusions,
hijacking your impeccable software.

Your fingers probe my neural network.The tingling sensation in the tips
of your fingers are my synapses responding to your touch. It's not
chemistry, it's electric. extending my bounday
but in cipherspace there are no bounds <or so they say>
BUT IN SPIRALSPACE THERE IS NO THEY
there is only *us*
Trying to flee the binary I enter the chromozone which is not one
XXYXXYXXYXXYXXYXXYXXYXXYXXYXXYXXYXXYXXYXX

Subject X says transcendence lies at the limit of worlds, where now and
now, here and elsewhere, text and membrane impact.

Where truth evaporates Where nothing is certain There are no maps

The limit is NO CARRIER, the sudden shock of no contact, reaching out to
touch <someone> but the skin is cold...

The limit is permission denied, vision doubled, and flesh necrotic.

Heavy eyelids fold over my pupils, like curtains of lead. Hot ice kisses
my synapses with an (ec)static rush. My system is nervous, neurons
screaming - spiralling towards the singularity. Floating in ether, my body
implodes.